“Please bring in some of the art you’ve done at home,” the teacher asks.

That’s going to be a little bit tricky …

Don’t worry, the garage doors were being replaced, and I’m thrilled with my colourful garage interior.

I adore street art. Several years ago Chichester did an amazing street art exhibition. These make a very teenager friendly alternative art tour. Plus I’m always up for a bit of stealth education. 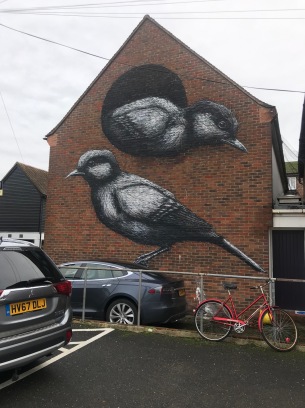 Sadly my favourite, “King of Cats”, was whitewashed over recently by the council following complaints about antisocial behaviour. Personally I’m happy that the Belgian artist, Joachim, has provided a new masterpiece for us to enjoy. The Chichester Observer reported

Joachim’s management said he had been ‘horrified’ to hear his King of Cats mural ‘attracted antisocial behaviour’ within the city of Chichester and took it upon himself to put things right. Knowing that cats can be rather antisocial by nature, Joachim decided to paint ‘The Watchdog’ to watch over the streets and keep the neighbourhood safe.

Back to our budding vandal. It was really no surprise that he wanted a graffiti birthday party. Near Waterloo Station in London is Leake Street Graffiti Tunnel where anyone, armed with a spray can or two, is permitted to make their mark, without getting arrested. The tunnel was originally created by Banksy although his artwork is long gone.

Luckily, his friends are urban cool, and their parents super chilled, so there was barely a raised eyebrow.

The toughest decision was what to paint over, because all the art was amazing, but eventually the spot was chosen and after a tentative start they all got into it.

Top tips if you’re thinking of taking the kids

The other artists working on the same day were super friendly and showed the kids how they used stencils in their designs.

There are official “street art” walking tours in various towns if you’re interested in exploring but unsure where to start. I was looking at the Shoreditch Street Art tour which I haven’t done but it’s on the list.

And since this is also a book blog, here’s a little bit of bookish news

Purely by coincidence, I just finished reading Revenge on the Rye by Alice Castle about the murder of a street artist, which I highly recommend. I blogged about this a few weeks ago.

18 thoughts on “(Legal) street art for all ages”